On Sunday, the fascist grouplet “Party for Freedom”, an openly xenophobic, islamophic and racist organisation held a demonstration outside the Halal foods Expo in Flemington, Victoria.

The group comprised mostly of late 20’s-mid 30’s men dressed themselves in different traditional Islamic garb of both sexes. The ones not in ‘costume’ wore shirts saying ‘RAPEfugees NOT WELCOME.’ Largely activists from Sydney, they were continuing their career as professional protesters from the North Shore. They were joined by a number of local racists, of both garden and skinhead variety. Even a couple of vegetarians turned up, because Halal is obviously far more evil than racism.

The group chanted insulting slogans, waved flags and placards, and stood over, abused, and taunted any number of families, women and children attending the event.

A small police escort watched over the events, with a detachment of PORT nearby waiting, several cars of police making rounds keeping a watchful eye, and a line of mounted cops standing in the background. None of these intervened of course. Freedom to harass and persecute minorities being the inherent human right of any white bloke in Australia, after all.

Then out of nowhere, our heroes from the lovely North Shore were having a fucking bad day.

A number of antifascists attacked from all sides. Fights immediately broke out, and almost all the fascists’ flags, placards, and banners were gone, all within two minutes. A number felt quite sore, and one bloke had to be taken to hospital after having copped his own flagpole in the eye. We’re still not sure how, but it wouldn’t surprise us if he was stupid enough to hit himself.

The police had no idea what to do, two people were temporarily detained but managed to bugger off, and the cops largely stood around in the horse shit their useless mounted unit provided. They’re still so confused they think everyone ‘jumped off the tram.’ Nick Folkes, the Party for Freedom’s chairman immediately got out his phone cam and provided a video of himself, on the verge of tears, decrying the actions of “An-tee-fa.” With no tools left, and their mates bruised and battered they had to pack up and fuck off back to their posh homes in Sydney to wank with bougie tears over how much they hate the multi-cultural working classes of ‘Straya. (Of course, everyone from An-tee-fa is on the dole, or Lee Rihannons paycheques, remember.)

However, the far-right were not the only group rather upset.

There has been plenty of outcry about the actions of the small groups attack on PFF.

“You’re as bad as each other.”

“It’s racist because you didn’t consult the concerned community.”

Maybe we are as bad as each other. But only to liberals. Fascism is a violent, authoritarian response to crises in capitalism, where members of all classes join together over an identity based around nation and ethnicity, excluding and persecuting minorities in order to shift the blame away from the real causes, and maintain a sense of solidarity in fear. When these movements grow, they are exploited by the folks at the top of the chain, to keep the rest of us in place. Fascists hate poor people. They might carry on about ‘caring for our own first’, but you never see them lift a finger to actually help. With one breath they will cry; “Feed the Aussie hungry first!”, then with the next “Fuck the dole bludgers, let them starve.” The fascists would divide us over religion and skin colour to satisfy the needs of the rich, and screw the rest of us.

Maybe some of us are dickhead blokes who are out to look and act tough. But you know what, we’re also just stupid working class people who will never have the enlightened views of our betters. We could apologise for thinking that it’s fucking horrible that people are allowed to get away with abusing minorities in our communities, and that we made a decision that we would stop it. But we won’t.

You know what else? We’re definitely not all blokes. Maybe what’s sexist is to assume that women don’t participate or organise in militant anti-fascist circles. I guess you wouldn’t know that women participate, because thankfully you don’t know who participates at all.  It’s the same for claims that it’s all white blokes. If anything, the people from these marginalised communities who may have participated have every god damn right to feel indignant enough to fight back. If you’re attacking militant antifascism on the grounds that it’s racist, be very careful.

Seems like all that black clothing and the facemasks work.

It’s not a tactic for every time, and it doesn’t replace the work that militants do in other spaces to help build positive things in their community. But the anonymity allows that to continue, and it’s effective in stopping fascists.

Some may say that to take such militant action without the consent of the rest of the ‘movement’ is vanguardist and unaccountable. This may be correct if we were attempting to lead the revolution, or to impose our ideas upon others. But we were not. The context of anti-fascism means this was the defense of our communities.

The fascists attempt to capitalise on discontent amongst communities that are exploited by the system, and blame minorities. The left wants to capitalise on discontent amongst communities, and fight the ruling class. Let’s not pretend as the Left we do not have our own interests in beating the fascists out of our communities. Let’s not pretend that victory is just out-numbering them and having the ‘moral high ground’ of non-violence. We know that violence is a tactic, that it is not to be fetishized but neither is it to be condemned when it’s appropriately targeted. Sometimes part of winning is organising and building the movement. Sometimes the victory is sending them fucking running, leaving them without resources to organise and looking like the fools they are.

Sunday achieved all of these last three objectives.

Maybe Nick Folkes and the Party for Freedom were an easy target. But they are still part of a very broad idea in Australia that Halal is somehow a violation of our rights, and that it’s okay to blame Muslims. Only last week the United Patriots Front unfurled a banner at a Collingwood/Richmond football game that said “Stop the Mosque!” One brave young comrade confronted them, and others rallied to support her. When we let the legitimisation of racist discourses go unchecked, we have failed.

The action in Flemington was successful. The Campaign Against Racism and Fascism demo in the city was successful, and Collingwood Football Club and it’s supporters told the United Patriots Front and other racists to piss off. On a day when the slogan was raised; ‘You’ll always lose in Melbourne’, it was made sure of. 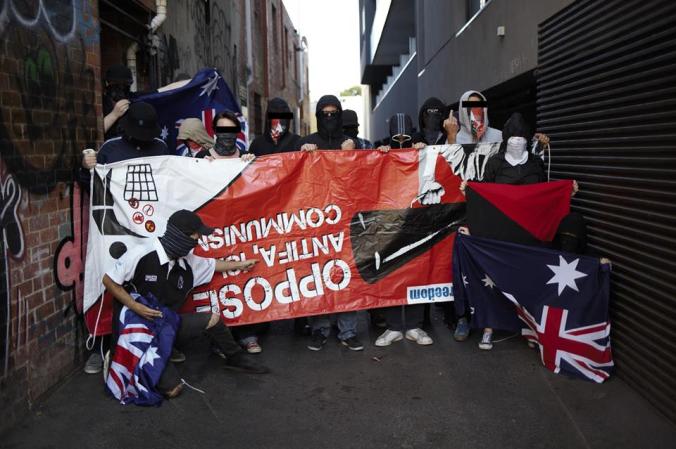