Dear lovely anti-racist folks of Melbourne (and gday to those further afield),

It’s less than 24 hours until a motley crew of fascists, neo-Nazis, white supremacists, extreme nationalists & racist ‘patriots’ plan on assembling in Coburg. Why? Well, fuck knows. Based on what they’re saying on facebook, it’s pretty much to whinge about the existence of brown folks; demonstrate their support for Australia’s policy of torturing refugees & asylum seekers through our network of privately-profitable concentration camps; and to pretend that communists secretly run the country.. or something.

Though this piece is a bit old now (it was published last year in the lead up to the July 18 Reclaim Australia rally @ Parliament), we reckon it’s still a useful read if you’re planning on coming along to tell the fash to get the eff outta Coburg tomorrow. We think now as we did then that everybody should be empowered to make informed decisions about how they participate in antifascist activities, without being told by others what they must do. 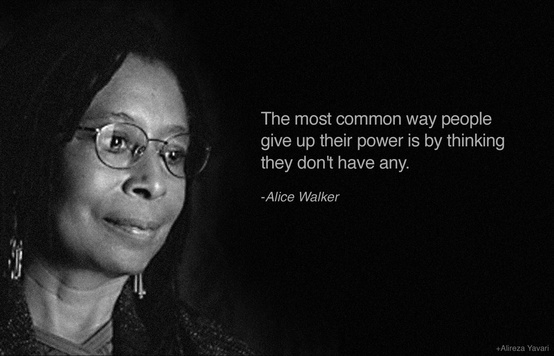 But we’re not just writing this blog entry to plug something we published nearly a year ago; even if we think it’s useful, encourage you to go read it & would appreciate it muchly if you shared it around! In addition, and as a matter of some urgency, we want to put forward some ideas about the stakes involved in tomorrow’s mobilisation.

The suburb of Coburg and Moreland generally is home to a diverse range of communities: ethnic, cultural, linguistic, national and religious. Many of these communities are ones that the UPF and Co. would like to see eliminated. The presence of an organised group of neo-Nazis, fascists and racists poses an immediate danger not only to locals but, if left unopposed, will further embolden these groups and individuals to continue to prosecute their divisive, racialised and reactionary politics.

Coburg has a proud history of resisting fascist intrusions into public spaces. It’s important to carry on that tradition and to let local fascists know that they are not welcome. Please attend the rally on Saturday, let others know about the rally, and be advised that a small group of fascists will be in the area, looking for opportunities to attack it and other targets.

We are not here to say that the Moreland Says No To Racism rally tomorrow is bad, or wrong. Indeed, nothing could be further from the truth. Leaflets distributed in the Moreland area in the past month by militant antifascists explicitly encourage people to attend the rally. As we have stated in the past, we broadly support all efforts to fight racism, and firmly oppose the notion that there is any one “right” way to do things.

However, we think that the intention of fascists to invade a fiercely & proudly diverse working-class neighborhood like Coburg is quite alarming, and that if they are not firmly persuaded to not try such things again, this will constitute the beginning of a new ‘march & grow’ strategy for Australian nationalists.

We believe that it is obvious that a diversity of tactics is the only way to meet the twin objectives of allowing the anti-racist community event to go forward on the one hand; and countering longer-term fascist strategic aspirations on the other. We see these goals as inseparable parts of the same struggle, and in that spirit, respectfully make the following three points.

1/ Pretending that the fash don’t exist is both a deeply flawed political position & an irresponsible way of dealing with a (potentially) volatile situation. If you are going to ask people to come out onto the streets in support of your campaign, you have a responsibility to communicate with them honestly about the the prospects, both good and bad, of the action. 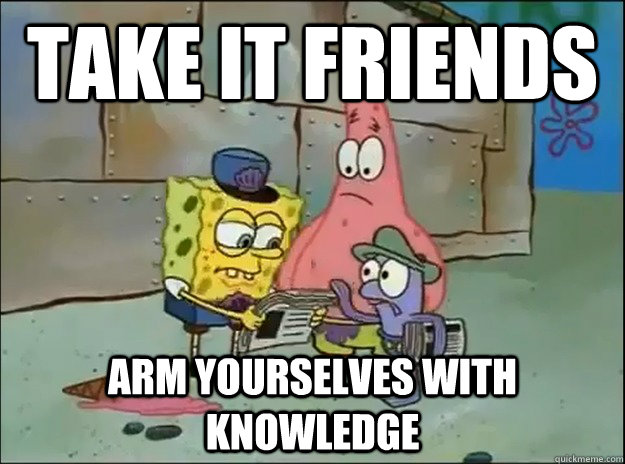 It is critical that people are informed about the far right in a way that neither overstates nor diminishes the potential threat they pose. We reckon knowledge is power, and that any serious antifascist campaign should strive to spread this knowledge as widely as possible. Indeed, we believe it is incumbent upon antifascist organisers to do so.

2/ Pretending that a police force engaged in every day acts of physical & structural violence against Indigenous, migrant, queer and working-class communities can be used as a tool to challenge racism is both bad politics & a fundamentally flawed strategy.

We say this, primarily, because the assertion that the cops will ‘deal’ with the far-right is a claim with no basis in reality – as anyone who has had Victoria Police turn a chemical weapon on them in the last year can attest.

Time & time again, we’ve seen the police bend over backwards to facilitate provocative fascist marches, despite the fact fascist organisers have been arming themselves with tasers, knives & in one case an actual handgun.

Time & time again, all we’ve seen the police do in response is deploy completely disproportional force against anti-racists, whether those anti-racists have been attempting to confront Nazis or merely holding a placard at a rally. 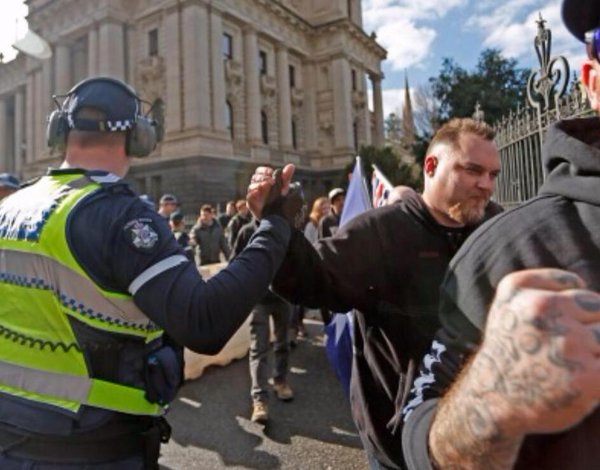 The photo above of the riot cop high-fiving a member of the UPF on July 18 last year is merely the tip of the iceberg. Quite simply, the ridiculous “patriot” movement that has consumed so much of our time & energy in the last year simply would not have continued to exist without VicPol’s commitment to letting them spread their bigotry & nonsense freely. Pointing this out has nothing to do with loving or hating the cops, it’s simply the reality of the situation.

3/ We believe that, whilst we cannot rely on the government or the police to challenge racism, we can rely on each other. Indeed, Melburnians have shown again and again in the course of the last year, in all sorts of different campaigns, that when we work together we can achieve a lot.

The fact that the Herald Sun in particular, news outlets more generally, the police & the government seek to slander & discredit progressive social movements at every opportunity is nothing if not testament to the fact that people getting organised & taking to the streets threatens their haughty power. 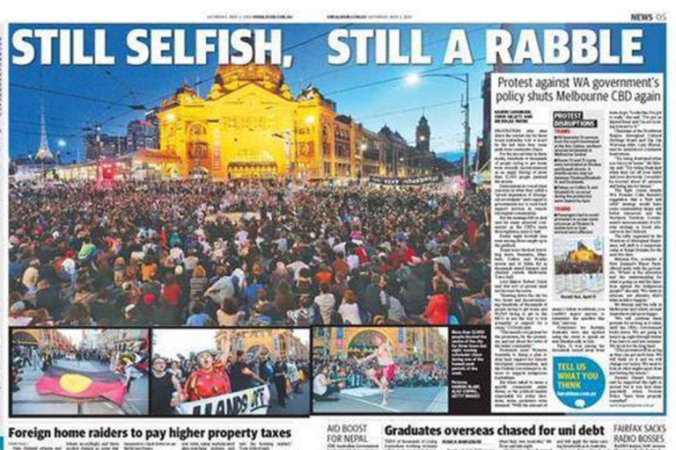 If we don’t listen to the Herald Scum any other day of the week, why do we suddenly care so much about what they have to say when they’re reporting on a protest or demonstration? And, for that matter, aren’t they largely responsible for inflaming the very racialised divisons & hatreds we’re trying to resist?

Put it this way: far apart from their role in perpetuating and maintaining forms of racist violence & oppression, if the cops or pollies or the media or whatever had any desire to “deal with the UPF”, do you not think that they would have acted to do so already? They’ve had more than a year to act.

Even if you hope that this rather bleak situation can be changed by lobbying the government, voting or writing letters to the paper – and though we clearly don’t believe this to be sufficient, we’re not trying to stop anyone from doing it – we don’t understand why the blossoming of grassroots community organisation & campaigns against racism would be anything other than an asset to that approach.

You don’t have to agree with us, and you certainly don’t have to do anything you are uncomfortable with doing / unable to do. All we ask is that the same solidarity & good faith we extend to you be granted to us. People from all over Melbourne are coming to support the Moreland Council rally by telling the fash to fuck off. It’s really actually just that simple.

Of course, the task before us is daunting. It’s fine to be nervous or afraid. That’s natural. As we see it, it’s our task to support one another through this fear & doubt & whatever may be thrown at us along the way. Divided, we can easily be controlled, intimidated, harassed or attacked.

But together, even against an adversary that wants to make us feel as if they’re so much bigger & tougher & stronger than we are, we can win.

We believe that though the many strategies employed by activists organising against racism differ significantly, they are mutually complementary, even if we disagree with the priority given to a particular course of action or the effectiveness of a particular approach.

When we say ‘remembering means fighting’, please don’t think we just mean physical confrontation. To us, fighting means (among other things):

Acting together. Organising collectively. Turning up on time. Looking after one another. Not giving into fascist threats. Not giving into their demands. Refusing to be intimidated by them. Standing up for our communities & the many different kinds of people who live in them. Not letting the Nazis have the streets & certainly not letting them be ignored.

We do whatever we can on the basis of what we can contribute, and that’s all we can do. Nobody is “weak” for being unable to fight, and nobody is “as bad as them” for being prepared to confront the fascists. In the words of the late, great Gil Scott-Heron “nobody can do everything; but everybody can do something.”

The guide we have linked to above is just one of the contributions to the debate we’ve made over the course of the last year, not to antagonise the pointless sectarian divisions that already hamstring progressive political forces in this country, but in the hope of demystifying antifascist practice & encouraging more people to get out there and act.

What we think is on the record, and if you disagree that’s fine, but please let’s disagree substantively, with reference to all the factors at play, and not simply on the basis of whichever niche political ideology you happen to subscribe to.  We don’t have any interest in telling people what to do and certainly not what they ought to think. We do however consider these questions to be both empirical & historical. It’s not a matter of sectarianism & certainly not a matter of heaping shit on others who are doing different things. It is simply us reflecting on the lessons we’ve learned in the last year, considering what worked & what didn’t work, and striving to do better.

What unites us is much greater than that on which we differ. We believe it a matter of urgent necessity to encourage more people to realise their own power, their collective potential & their responsibility to act. We want, as we’re sure many others do, the most people possible to get out there & participate. Not only because it’s the right thing, not only because it’s important but also because we believe that through this experience, we can empower people to begin organising in their communities to confront the very real problems we all face; and not just spend all our time chasing Nazis off the street.

Only together can we make the world a better place.

Let’s get on with it. 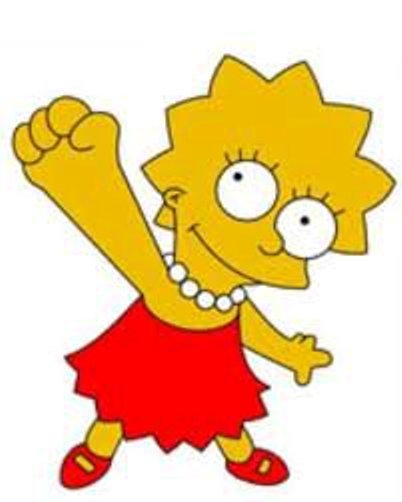